Outwood Primary Academy Greystone (formerly Greystone Community Primary School) is the first in Ripon to have been awarded ‘School of Sanctuary’ status. To coincide with the Ripon Poetry Festival in October 2017 (which featured a session entitled ‘Poetry and Sanctuary‘, led by 2 Syrian guest poets we had invited), we asked children from Greystone to contribute their own poetry inspired by sessions we’d run for them on the subject of flight from war. 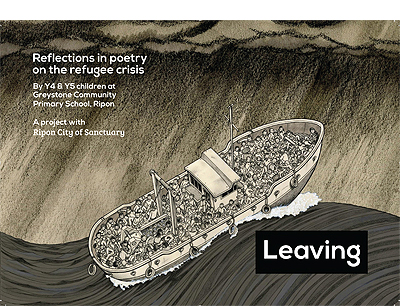 We compiled a selection of the children’s poems into an anthology which was given out to everyone at the Poetry and Sanctuary session, and it was also made available throughout the entire poetry weekend. The anthology subsequently went to the House of Commons and even the House of Lords (see below). Ripon City of Sanctuary would like to thank all of the children and staff at the school for all of their hard work on this project and all that they have done to embed issues of asylum within their curriculum.

On 28 November 2017, a small group of children and staff from Greystone school subsequently took their recently printed anthology to Sanctuary in Parliament 2017, an annual day at Westminster in which City of Sanctuary engages with as many MPs as possible in order to raise and discuss issues of sanctuary and welcome. The children read some of their poems aloud to an audience of around 100, made up of MPs and staffers, and gave each attendee their own copy of the booklet. Lord Newby, Liberal Democrat leader in the House of Lords, took an interest in the anthology and shared several dozen copies with his colleague in the House of Lords. The children had a wonderful day out and were no doubt astonished at how their local project ended up being seen by so many politicians in London.